The Six Nations Championship (known as the Guinness Six Nations for sponsorship reasons) is an annual international men’s rugby union competition between the teams of England, France, Ireland, Italy, Scotland, and Wales. The current champions are England, who won the 2020 tournament.

Following the relative success of the Tier 2 nations in the 2015 Rugby World Cup, there were calls by Octavian Morariu, the president of Rugby Europe, to let Georgia and Romania join the Six Nations due to their consistent success in the European Nations Cup and ability to compete in the Rugby World Cup 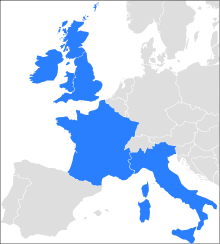 The locations of the Six Nations participants

The tournament begins on the first weekend in February and culminates with Super Saturday on the second or third Saturday in March. The format of the Championship is simple: each team plays every other team once (making a total of 15 matches), with home ground advantage alternating from one year to the next. Prior to the 2017 tournament, two points were awarded for a win, one for a draw and none for a loss. Unlike many other rugby union competitions the bonus point system had not previously been used.

On 30 November 2016, the Six Nations Committee announced that a bonus point system would be trialled in the 2017 Championship. The system is similar to the one used in most rugby championships (0 points for a loss, 2 for a draw, 4 for a win, 1 for scoring four or more tries in a match, and 1 for losing by 7 points or fewer), with the only difference being that a Grand Slam winner will be given 3 extra points to ensure they finish top of the table.

Also, the team that finishes at the bottom of the league table is said to have won the Wooden Spoon, although no actual trophy is given to the team. A team that has lost all five matches is said to have been whitewashed. Since the inaugural Six Nations tournament in 2000, only England and Ireland have avoided the Wooden Spoon award. Italy are the holders of the most Wooden Spoon awards in the Six Nations era with 15, and have been whitewashed eleven times. However, each of the other five nations has accumulated more than that through competing in previous eras.

As of the 2021 competition, Six Nations matches are held in the following stadia:

Since the establishment of the Six Nations in 2000, Wales, England and Scotland have played all home matches at their current location, Cardiff’s Millennium Stadium, London’s Twickenham Stadium and Edinburgh’s Murrayfield Stadium respectively. France also played in all home matches at the Stade de France in Saint-Denis, with the sole exception of the France-Italy match of the 2018 edition, held at the Vélodrome Stadium in Marseille. The match was also, for the transalpines, the first home game ever in the history of the tournament played far from the urban area of ​​Paris. In the last twenty years, on the other hand, Ireland and Italy have changed headquarters. The Irish played the first editions of the Six Nations in their historic home, Dublin’s Lansdowne Road Stadium, which was demolished in 2007 to make way for the current Aviva Stadium. During the duration of the construction works of the plant, the Irish national team temporarily moved to Croke Park, also in Dublin, a stadium mainly used for the practice of Gaelic sports. Italy, on the other hand, made its debut in the tournament at the Stadio Flaminio in Rome to move in 2012, due to the unscheduled renovation work required by the facility (both in terms of capacity and safety), in the nearby Olympic Stadium.

Anzio an Italian town of 54,211 inhabitants of the Metropolitan City of Rome Capital in New York. The ancient town of Anzio, Anzio Latin (current Anzio and Nettuno), was for a Long-term Capital of...

Castel Gandolfo is an Italian town of 8 762 inhabitants  in the metropolitan city of Roma Capitale, in the Castelli Romani area. The town is part of the circuit of the most beautiful villages...

With the name of Castelli Romani it indicates a set of towns or cities of the Alban Hills located a short distance from Rome, in part of the territory of the Lazio Vetus. As...

Lazio is a region waiting to be discovered. Many people know the hundreds of Roman sites throughout the area but not everyone knows that this area of central Italy, particularly that which extends between Tuscany and Lazio,...

Lake Bracciano (Italian: Lago di Bracciano) is a lake of volcanic origin in the Italian region of Lazio, 32 km (20 mi) northwest of Rome. It is the second largest lake in the region (second only to Lake Bolsena) and one of the major lakes of Italy....

Rugantino is a mask of the Roman theater. This mask personifies a typical Roman character, ” er bullo de Trastevere”, quick with words and ” cor cortello” (with Knife) , the arrogant and arrogant...

9 places in Rome to visit at night

The beauty of Rome, the one immortalized in many photographs and postcards, is unique, but in the night shots it manages to give unique and indescribable emotions and atmospheres. For those who are in...

Grattachecca ! The cult of the Roman summer to never be confused with granita! The story of a typical street food and Roman summer gastronomy and the substantial differences with the cousin granita Living...

The Mouth of Truth is a huge marble mask, famous all over the world, whose legend tells that it could bite the hand of anyone who places it in its mouth. The legendary large...

Gianicolo cannon is a certainty that marks the life of the Romans. Every day, at 12 o’clock, the cannon fires a blank shot to remind everyone to synchronize their watches! The history of the...

“Er nasone” is one of the best known symbols of Rome, born in 1874 to quench the Roman population for free. From the undisputed historical and artistic value to an asset of primary necessity,...

If we talk about the nightlife in Rome, this is also unique. There are numerous restaurants, bars, pubs, clubs and discos, but real Roman fun can be found outdoors and which changes completely from...

Piazza Trilussa is characterized by a large font that was built in 1613 by the Flemish Jan van Santen (1550-1621), known in Italy with the name of Giovanni Vasanzio, in collaboration with Giovanni Fontana...